2. A pressure vessel according to Claim 1, wherein the or each internal lifting feature (51a, 51b, 51c) comprises a protrusion extending inwards from the region of an interior surface (48) of a wall portion of the pressure vessel (1), substantially in the direction of the axis of rotation (7) of the vessel (1).

Brief Summary of the lnvention

[0015] The or each internal lifting feature preferably comprises a protrusion extending inwards from the region of an interior surface of a wall portion of the pressure vessel, substantially in the direction of the axis of rotation of the vessel, in particular, substantially radially inwards.

Detailed Description of the Drawings

[0037] Figures 1 to 6 inclusive relate to prior art peeling systems and have already been discussed.

[0038] Referring now to Figures 7, 8 and 9, there is shown a steam peeling system according to the present invention, incorporating a steam peeling pressure vessel 1 in accordance with the invention (…)

[0049] Referring now to Figures 12, 13 and 14, these show structural and internal details of the pressure vessel 1. A simple shell structure of the general shape of a solid doughnut, namely one without a central aperture, is used. In other words, in this embodiment, the structure 1 resembles a sphere with squashed-in sides, 42, 43, but a wide diversity of other shapes and constructions may be applied. The structure 1 is rotatable about an axis 7 extending between the two somewhat flattened sides. The simplicity of the structure is particularly advantageous for construction as a shell. The pressure vessel 1 may be assembled from two dished portions, for example, ellipsoidal dished ends, welded together along their rims.

[0050] It is important to emphasise that the reference to "a sphere" in describing the shape of the pressure vessel 1 of the invention is for the purposes of such description only and the present inventive unit 1 in no way equates to a wholly spherical pressure vessel as known in the prior art. Thus in referring to the unit 1 of the invention as being in the shape of a solid doughnut, what is in question is a so called jam doughnut, rather than a doughnut with a central aperture passing through it. As noted, the unit 1 may be formed from two dished shells, fixed together such as by welding along their rims. An ellipsoidal cross section may suitably be used lor each shell, but this shape is not an essential aspect of the unit 1 according to the invention. The vessel 1 of the invention is to be distinguished from any fully spherical unit of the prior art by its aspect ratio, namely the ratio of the maximum diameter of the pressure vessel 1 to its width, this latter being defined as its wall to wall dimension substantially along its axis of rotation 7, i.e. between walls 42 and 43. For a

sphere, as in the known pressure vessel, the aspect ratio is 1:1, whereas in the unit 1 of the invention, the aspect ratio is in the range from 1.2:1 upwards, e.g., in a typical construction of the order of about 2:1. Thus the overall shape of the unit 1 is somewhat similar to that of a low aspect tyre as applied in modem high performance motor vehicles.

[0051] As shown in the drawings, bearing mountings 44. 45 are provided on the flat side faces 42, 43 of the pressure vessel 1, and one 44 of these bearing mountings 44, 45 is provided with a single opening or port 46 tor steam discharge, as subsequently described and discussed. (…)

[0053] The internal shape of the vessel 1 is also adapted to assist in lifting product 3 held within the vessel 1 during rotation, to ensure constant product 3 movement during vessel 1 rotation. Such lifting/mixing action enables more uniform peeling to be achieved, due to more uniform application of steam to the product 3. Lifting features 51a, 51b and 51c within the vessel 1 are shown in the drawing, in the form of inward protrusions from vessel internal surface 48. Lifting features 51 a, 51 b, 51 c of this kind may also be defined or referred to as paddle lifters, and a multiplicity of such features may be used, lor example three in an exemplary embodiment as shown in Figure 12. This feature of the invention is of particular significance and advantage and is further described below.

[0078] Referring now to Figures 20 and 21, there is illustrated the provision of a lifting arrangement 51 a, 51 b and 51 c as defined in accordance with the present invention within a steam peeling vessel 1 'of known or substantially conventional construction. In this prior art pressure vessel, the unit 1' has a generally cylindrical form and is rotated about a transverse axis 7 perpendicular to the longitudinal axis of the vessel 1 '. The door and loading and discharge point 4' are located at one axial end of this elongate vessel 1 '. As shown in Figures 20 and 21 , the vessel 1' is provided with a series of lifting features, 51 a', 51 b' and 51c' these being defined by indents or protrusions directed inwardly from the region of the inner wall 48' of the pressure vessel and defined, in the particular embodiment shown, by inward indentations or protrusions formed in a perforated condensate floor or liner 64' as described in connection with the vessel of Figures 17, 18 and 19. However, the provision of lifters 51a', 51 b' and 51c' within this pressure vessel 1' of conventional or prior art design is not confined to arrangements in which they are formed by deformations of a condensate floor 64'. In variants of the invention, the inwardly directed lifters 51 a', 51 b' and 51c' may be defined by independent features, appropriately located on suitable regions of the inner wall 48' of the pressure vessel 1 ', such as welded on angled plate portions, as previously described, and the lifters 51 a', 51 b' and 51 c' may then also define steam savers as understood in terms of the present invention.

[0079] The unit 1, 1' of the invention provides exceptionally good product mixing during steam treatment. Within the rotational speed range specified, not only is the degree of mixing good, but the mixing action is such that there is also minimal damage to product 3, for example potatoes or also small carrots. Even in the event of an extended mixing period, not usual in conventional operation, the level of damage is nonetheless minimised. The mixing action is such that products 3 such as potatoes or small carrots roll at all times and there is no throwing of product 3. The mixing action is directed to enabling steam to access each individual product 3, and this is facilitated by the tumbling action according to the system of the invention. The action provided by the present invention is to be distinguished from the stirring type mixing used in other technologies, where the objective is to effectively integrate or sift together a multiplicity of different media. In the present invention, the objective is to give access for steam to the external surface of every product item 3 to an optimum extent.

Brief Description of the Drawings

Figure 7 is a side view of the novel rotatable steam peeling vessel and associated features provided by the invention,

Figure 8 is an end view from the righthand side of the arrangement of Figure 7,

Figure 9 is a top or plan view of the arrangement according to Figures 7 and 8,

Figure 1 0 is a diagrammatic side view of a steam peeling pressure vessel and associated feed hopper according to the invention, operating in a first stage of a feed or loading operation,

Figure 11 corresponds to Figure 10, showing a feed or loading operation in a second stage,

Figure 12 is a central sectional side view of the steam peeling pressure vessel provided by the present invention, showing internal features of the vessel,

Figure 20 shows a known construction of steam peeler vessel fitted with condensate separation features and also incorporating product lifting or mixing features in accordance with the invention, in diagrammatic side sectional view,

Figure 21 is a diagrammatic top view of the modified peeler vessel of Figure 20, on the plane C-C of Figure 20, again with omission of selected features not essential to understanding the invention in this variant, (…) 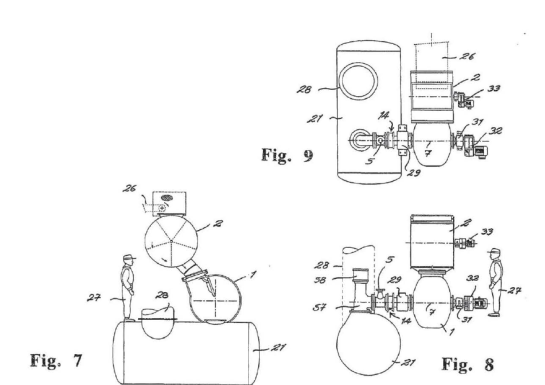 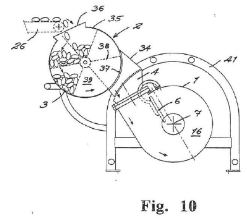 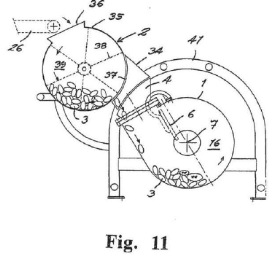 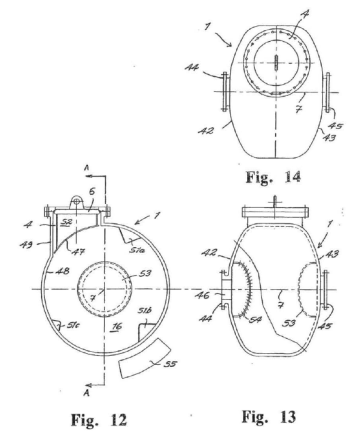 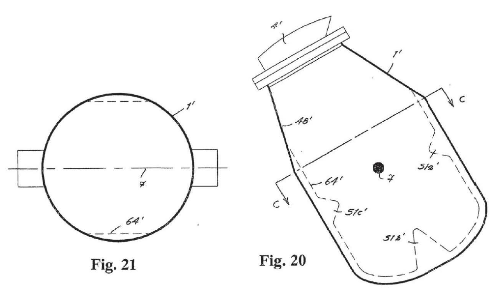 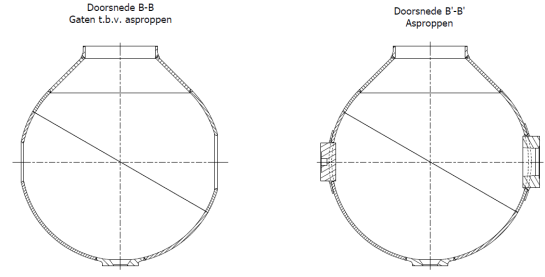 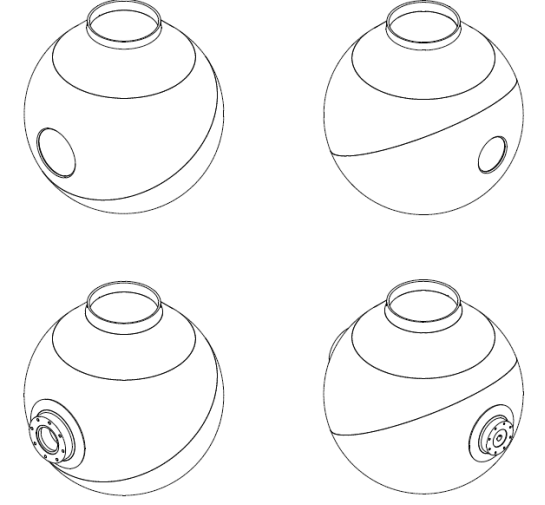 A pressure vessel (1) for steam treatment of product (3) to be peeled in a steam peeling system,

the pressure vessel (1) having substantially the shape of a sphere with opposed flattened side surfaces (42, 43), 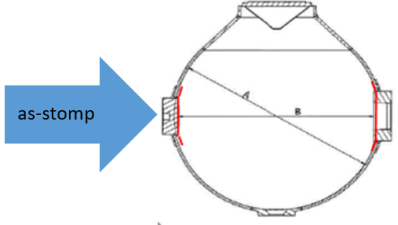