4. A self-sealing pressure release apparatus according to any preceding claim, wherein the closure member (67) is mounted for substantially metal-to-metal contact with a valve seat portion (63), without interposition of any sealing element.

6. A self-sealing pressure release apparatus according to any preceding claim, comprising a seat portion (64) for engagement by a face portion (67b, 67c) of the closure member (67), the seat portion (64) being interchangeably secured to a valve body portion (62) in the seat region.

7. A self-sealing pressure release apparatus according to any preceding claim, wherein the closure member (67) is mounted for substantially vertical displacement between said closed disposition and an open disposition of the valve (61).

11. A product treatment system according to Claim 10, wherein said solids trap (78) acts in a cyclonic manner.

12. A product treatment system according to Claim 10 or Claim 11, comprising an exhaust stack (28) communicating between said solids trap (78) and atmosphere, said stack (28) including noise reduction means (91, 92). 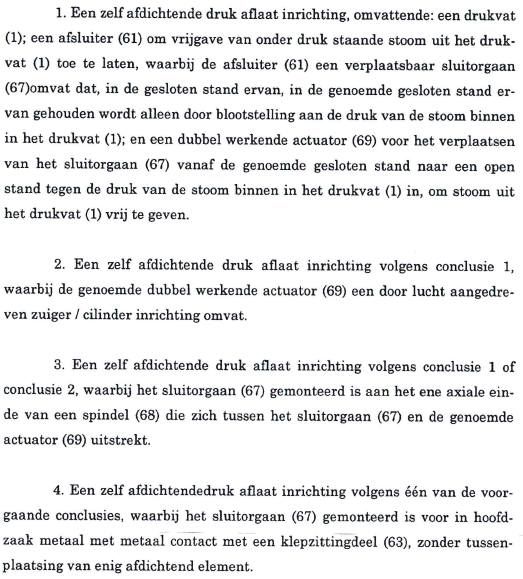 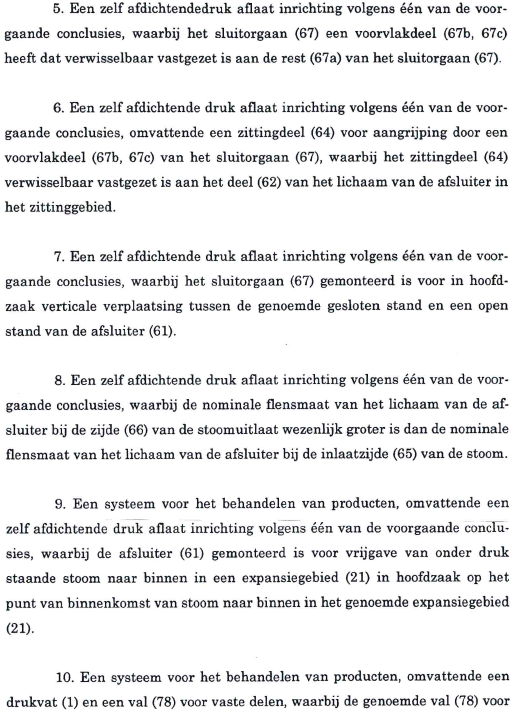 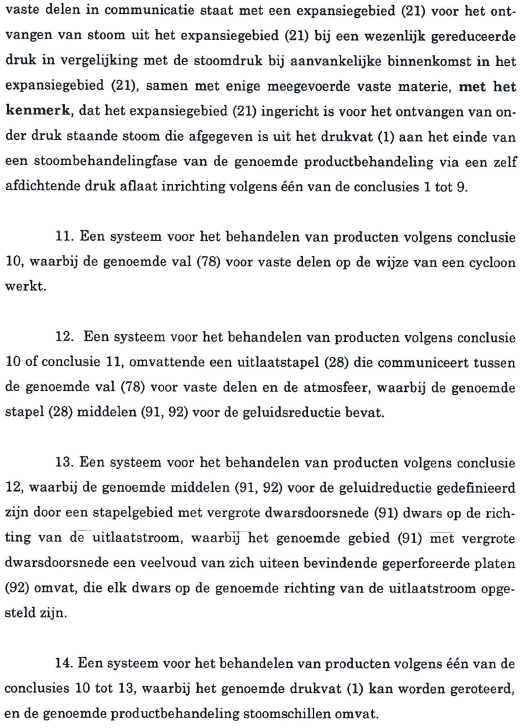 Background to the Invention

Description of the prior art

[0002] Reference is made to Applicant's International Patent Application No. PCT/IE 01/00076, Publication No. WO/A/01/93704, in which there is described a pressure vessel for steam treatment of product to be peeled in a steam peeling system. The rotatable pressure vessel has substantially the shape of a sphere with opposed flattened side surfaces. Internal lifting features enable entraining and raising of product relative to the axis of the rotation of the pressure vessel during such rotation. Internal regions closed off against ingress of steam during product treatment define steam savers. A product treatment system incorporting the rotatable pressure vessel may also include a batcher for delivery of product to be peeled. There may be provision for accelerated pressure drop on completion of a peeling operation, as well as arrangements for minimising release of entrained solid matter and/or odours in exhaust steam. Control features of the system enable unproductive displacement of the pressure vessel to be minimised.

Brief Summary of the Invention

Detailed Description of the Drawings

[0029] Figure 6 shows an improved pressure release valve 61 provided by the present invention. The valve of Figure 6 is particularly suitable for a rotatable vessel such as that of Figures 1 to 4, but is not limited to rotating peelers. It is also applicable to static peelers, and to static and displaceable steam pressure vessels in other product treatment systems, as well as being suitable for use in substantially any circumstances where a rapid reduction in steam pressure (viz., substantial blowdown) is needed. The direction of flow through the valve 61 is reversed as compared with the prior art valve 11.

[0030] Thus the valve 61 of the invention is self-sealing during pressurisation and is held closed by the steam pressure. Metal-to-metal contact is provided between the valve seat 63 and the valve disk 67. This arrangement provides a self-cleaning effect at the valve seat 63. The air piston 71 is active for generally approximately 0.25 seconds to effect the valve opening action. While the valve element 67 requires to be displaced against the steam pressure, as compared with the pressure-assisted opening of the prior art, rapid movement of the element 67 against the pressure is readily achieved by suitable selection of the dimensions of the air motor 69, in particular piston 71 and cylinder diameter, and of the air pressures used. No difficulty has been experienced in experiments in opening the valve of the invention within the required brief time period, even against full steam pressure. Effectively the valve of the invention operates by brute force and does so in a fully successful manner. 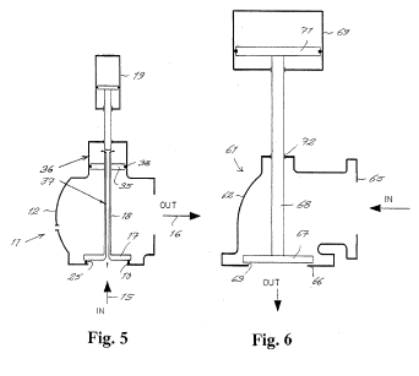 2 After careful consideration of the arguments presented by the applicant with respect to D1 [dit is het hierna in 2.10 beschreven Amerikaanse octrooi US 3 811 279 A1, Vzr.], the objections for lack of novelty under Article 54 EPC are maintained:
The applicant argues that the valve known from D1 would not be maintained in its closed position by exposure to the pressure inside the vessel it is sealing, but by the action of a spring. This feature of the valve defined in claim 1 is a functional feature, and the technical feature that allows for such a function relies on the back of the valve closure member being exposed to the pressure inside said vessel. This, however, is also the case in any of the valves of D1, as shown in Figures 1, 2, 3 and 5. In that respect the applicant's attention is drawn to the fact that the valves shown in Figures 3 and 5 are not provided with helical springs as closing members, but only comprise the features defined in present claim 1, and also present in the embodiments described in the present application. It is quite clear that, once the valves of Figures 3 or 5 of D1 are closed, the pressure acting on the back of the closure member will effectively maintain said member in the closing position, if the pressure at the other side of the closing member is lower than the one on the pressure side. While this may be assisted by pressurising the servo-cylinder connected to the closure member, this may also be the case for the valve according to claim 1. Since the servo-cylinder of the valve of D1 also provides for opening of the valve against the pressure inside the pressure vessel, all features of claim 1 are already known from D1.
In that respect it may be pointed out that the pressure vessel does not form part of the valve of claim 1, and that a valve having all technical features of claim 1 only has to be suitable for being mounted for enabling release of pressurised steam from a pressure vessel (see Guidelines CIII-4.13 and CIII-4.14).

Claim 1 has been amended to be directed to a self-sealing pressure release apparatus comprising in addition to the valve of original claim 1, a pressure vessel and a double-acting actuator. (…)

D1 does not disclose a self-sealing pressure release apparatus comprising a pressure vessel as claimed in Claim 1.

In D1, valve 20 in Figure 1 is a shut-off valve for a working medium circuit, not a release valve. The system disclosed in D1 must be viewed as a whole. Shut-off valve 20 shuts off a line between a steam collecting space in an evaporator 14 and a steam turbine 21 coupled to an electricity generator 22. The val[v]e closure member 34 in D1 is actuated by the working medium of the circuit. The servo-piston 5 (and hence valve closure member 35) in D1 is moved up and down (figs 1-2 and 5) / left and right (fig 3) in servo-cylinder 32 by changing the pressure of the working medium between lines 40 and 50.

As D1 fails to disclose all features of amended claim 1, [c]laim 1 meets the requirements of Article 54 EPC with respect to novelty. It follows that all dependent claims also exhibit novelty over the prior art. 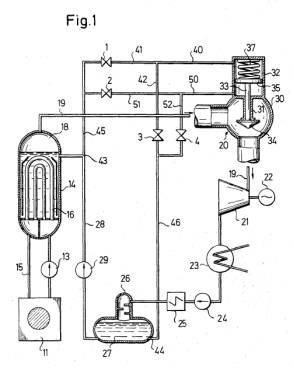 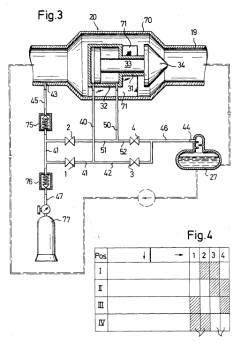 The water for the secondary circuit is drawn from a feed water tank 27 by a feed pump 29 and fed to the evaporator 14 along a line 28. A line 19 in which the shut-off valve 20 is located leads from a steam collecting space 18 at the top of the evaporator 14 to a steam turbine 21, in which expansion of the secondary working medium evaporated in the evaporator 14 takes place. The steam turbine 21 is coupled to an electricity generator 22 as is known. The expanded working medium leaving the turbine 21 is directed to and condensed in a condenser 23. The condensate returns through a condensate pump 24, a steam-heated preheater 25 and a deareator 26 to the feed water tank 27.

When the plant is relieved of pressure, the shut-off valve 20 is closed due to the action of the spring 37. If steam pressure builds up in the steam collecting space 18 in the evaporator 14, the shut-off valve 20 can be opened by opening the valves 2, 3 and closing the valves 1, 4. In this case, liquid working medium under pressure flows along the line 28 and the lines 45, 51 and 50 into the space below the servo-piston 35, while the chamber above the servo-piston 35 is connected by the lines 40, 42 and 46 to the point 44 where the pressure is lower than at the point 43. The working medium at a higher pressure in the lower chamber compresses the spring 37 and the shut-off valve 20 opens.3