has been deployed. GSM is one of the second generation (2G) networks for mobile communications. Despite its enormous success, there was a need for a global standard for the next cellular developments which could provide the user with higher data rates.

3. Since then, the 3GPP consortium ‘Third Generation Partnership Project’ has been responsible for the maintenance and further evolution of the UMTS specifications. In Europe, the relevant standards organisation is the ‘European Telecommunications Standards Institute’ (ETSI), which is a partner of 3GPP.

5. The introduction of the HSDPA- and HSUPA-protocols significantly increased the maximum data transmission speeds available, allowing users to download and upload data (such as internet pages and pictures) much more quickly than before.

7. The CN is the entity that interfaces with external networks, including the public phone network, other cellular telecommunications networks and the internet. The UTRAN is the radio access network. It contains base stations (BS) (in UMTS called ‘Node B’s) that are equipped to send and receive radio signals. Via these radio signals, a base station is able to communicate with a mobile station (MS) (in UMTS called ‘User Equipment’ or ‘UE’), such as a mobile telephone. A base station typically serves a particular geographical area, commonly referred to as a “cell” (it may also control more than one cell). The UTRAN also interfaces with the CN and thus forms a “bridge” between the UE and the CN.

8. The UMTS network is schematically shown below: 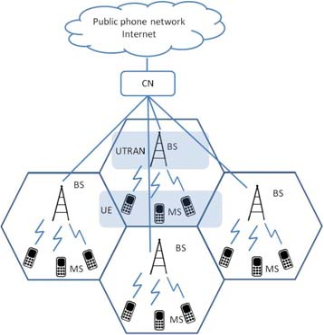 10. One of the main differences between GSM and UMTS is the manner in which the transmissions of different mobile stations are distinguished from one another.

12. The most wide-spread version of the UMTS-radio interface (often referred to as W-CDMA) uses ‘Code Division Multiple Access’ (CDMA). In CDMA, the transmissions of the different mobile stations occupy the same time slots and the same frequencies, but are separated from one another through the use of codes. Each mobile station has one or more unique codes (at least within one cell), which enables the mobile station to only “listen” to the transmissions that are specifically intended for this mobile station.

13. CDMA thus allows multiple transmissions on the same frequency and at the same time, which leads to a more flexible use of transmission resources, and in several respects to a simpler implementation than TDMA. Consequently, an important increase in efficiency can be achieved resulting in greater network capacity at a reasonable cost.

16. A dedicated channel is a channel which is assigned to one specific mobile station:

17. A shared channel may be used by more than one mobile station: 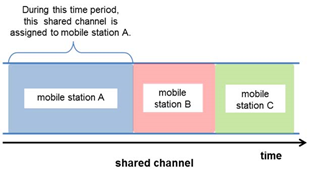 21. When receiving a transmission, the received data and control signals are processed at the lower layers first and passed via the channels to higher layers.

22. A correspondence referred to as “mapping” is established between associated logical channels, transport channels and physical channels so that data transmission can be carried out in accordance with the requirements defined at each level of the hierarchy.

23. Below is an overview of the various logical-, transport- and physical channels and their “mapping”.

24. Amongst the physical channels introduced in UMTS (Release 99) are the DPCCH and the DPDCH – which are both “Dedicated Physical Channels” (DPCH) -:

The DPCCH is a dedicated channel that carries control information such as power control commands, i.e. commands that instruct the mobile station or the base station to increase or decrease its transmission power (see below). Different DPCCHs may be defined for uplink and downlink transmission. The DPCCH is always configured when a radio connection is established between a mobile station and a base station (i.e. when the mobile station is in contact with a base station). This is even the case when there is no actual data being transmitted (i.e. when the user is not actively using his mobile telephone).

The DPDCH is a dedicated channel that transfers data, such as speech or video data. Different DPDCHs may be defined for transmission in each of the uplink and the downlink directions. Unlike the DPCCH, the DPDCH is only configured when actual data transmission occurs between a base station and a mobile station (i.e. when the user is actively using his mobile telephone). In that case, several DPDCHs can be configured at the same time.

25. In 2002, the HSDPA- (“High Speed Downlink Packet Access”) protocol was introduced. HSDPA is a technology for high speed downloading, i.e. from the base station to the mobile station. The protocol is built onto the existing UMTS technology and is aimed at providing increased data transfer speeds.

26. To enable the increase in data transfer speed, it was vital to make most efficient use of the available network resources, such as transmission frequencies and time. In order to achieve this, a number of additional channels were introduced under the HSDPA-protocol.

28. The newly added shared physical channels in HSDPA include:

The F-DPCH is a shared downlink channel that is used by the base station to transmit control information to the mobile station during HSDPA transmission, such as power control commands (see below).

30. In 2004, the HSUPA- (“High Speed Uplink Packet Access”) protocol was introduced. HSUPA is a technology for high speed uplink transmission, i.e. from the mobile station to the base station. Like HSDPA, also the HSUPA-protocol is built onto the existing UMTS technology and is aimed at providing increased data transfer speeds. HSUPA allows, for example, faster uploading of pictures or videos made by the user with his mobile telephone.

31. The newly added (physical) channels in HSUPA include the following dedicated channels:

The E-DPCCH carries data specifically related to E-DPDCH transmission. The data includes information necessary for a base station to decode the E-DPDCH data.

32. The uplink and downlink transmissions in a wireless communication system, such as UMTS, are susceptible to error introduced during transmission. In order to mitigate the effect of errors in the transmitted data, various error detection/correction mechanisms are used in UMTS. One of these mechanisms is the so-called “Automatic Repeat reQuest” (ARQ) system. 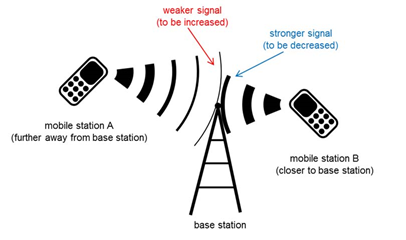 37. This is of particular relevance in UMTS. As explained above, UMTS allows more than one mobile station to communicate with a base station on the same frequency and at the same time. Signals from different mobile stations are thus more likely to interfere with each other.

38. Against this background, it is of importance to control the transmit power of each mobile station in order to limit this undesirable interference. 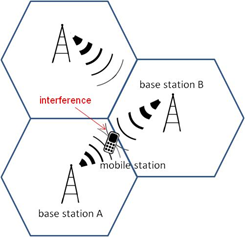 1. A radio station (100) comprising transmitter means (110) for transmitting over a channel in a predetermined time period (0 to tF) a data block comprising information symbols (I) and parity check symbols (C) and control means (150) responsive to an indication of a reduction in channel quality according to a first criterion for decreasing the data transmit power and responsive to an indication within the predetermined time period of an increase in channel quality according to a second criterion for increasing the data transmit power.

9. A radio station as claimed in any of claims 1 to 8, wherein the indication of a reduction in channel quality according to the first criterion is an indication to increase transmit power above a predetermined threshold (P2).

10. A radio station as claimed in claim 9, wherein the indication to increase transmit power is a received command.

23. A radio communication system comprising at least one radio station (100) as claimed in any of claims 1 to 21.

24. A method of operating a radio communication system (100, 200), comprising, at a first radio station (100), transmitting (500) over a channel in a predetermined time period (510, 550) to a second radio station (200) a data block comprising information symbols (I) and parity check symbols (C), and, in response to an indication of a reduction in channel quality according to a first criterion (520), decreasing the data transmit power (530) and, in response to an indication within the predetermined time period (550) of an increase in channel quality according to a second criterion (560), increasing the data transmit power (570).

32. A method as claimed in any of claims 24 to 31, wherein the indication of a reduction in channel quality according to the first criterion is an indication to increase transmit power above a predetermined threshold (P2).

33. A method as claimed in claim 32, wherein the indication to increase transmit power is a received command.

[0027] The first criterion, for determining when the data transmit power decrease to level P1 occurs, may take one of many forms. Some examples are:

(…)
[0034] The second criterion, for determining when to increase the transmit power and if appropriate resume the full tracking of the variations in channel quality by the transmit power level, may take one of several forms. Some examples are as follows: 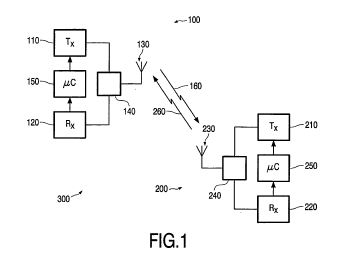 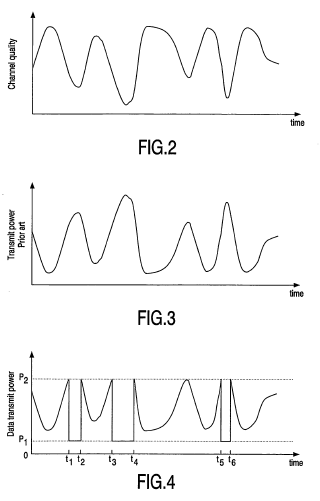 “In closed-loop power control schemes, a second transceiver station [bijv. een basistation; adv.] measures the quality of a signal received from a first transceiver station [bijv. een mobiel station; adv.] and then issues TPC commands to the first transceiver station to either raise or lower its transmit power as appropriate. [..] Typically the measurement of signal quality is made on a pilot signal transmitted in multiplex with the desired information signal. The TPC commands may be binary ones and zeros corresponding respectively to “increase’ or “decrease” power.”

“One problem with the TPC schemes described above is that power consumption of the transmitter increases when channel conditions are poor, and therefore the schemes may not be power efficient. Another problem is that the increase in transmitted power increases the interference to other users, which can degrade system efficiency.”

“According to a first aspect of the invention there is provided a radio system comprising transmitter means for transmitting over a channel in a predetermined time period a data block comprising information symbols and parity check symbols and control means responsive to an indication of a reduction in channel quality according to a first criterion for decreasing the data transmit power and responsive to an indication within the predetermined time period of an increase in channel quality according to a second criterion for increasing the data transmit power.”

“During operation of the first radio station 100 after decreasing the transmit power following the first criterion being met, and before the second criterion is met, any control signal transmitted by the first station 100 may be [..] continued with varying power to continue to track the changes in channel quality to some extent [..]” 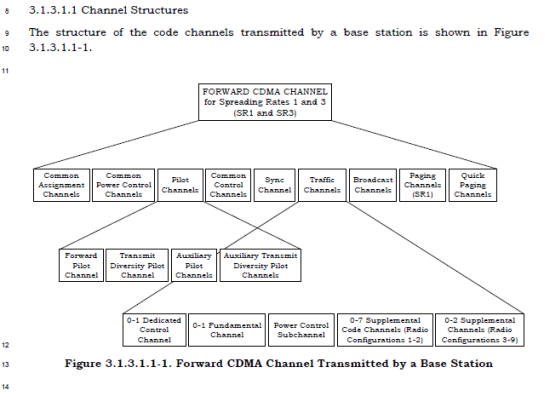 33 From the base station’s perspective, the Reverse CDMA Channel is the sum of all mobile 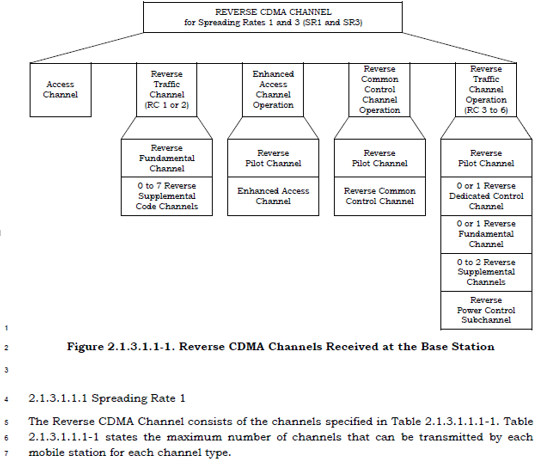 The data rate and frame duration on a Reverse Fundamental Channel within a radio configuration shall be selected on a frame-by-frame basis.

16 Reverse Supplemental Channel. A portion of a Radio Configuration 3 through 6 Reverse

19 data rate services, and on which higher-level data is transmitted.

11
The Reverse Supplemental Channel applies to Radio Configurations 3 through 6 only.

13 base station during a call. The Reverse Traffic Channel contains up to two Reverse

12 allocations. All frames shall consist of zero or one Reserved Bits followed by the information

6 When the Physical Layer receives a Transmit SCH Request from the MAC Layer, the mobile

7 station shall perform the following:

10 • If SDU is not equal to NULL, transmit a Reverse Supplemental Channel frame of

10 Channel or on the Forward Dedicated Control Channel.

11 When the mobile station is not operating in the gated transmission mode, the subchannel

22 level, and a ‘1’ bit shall indicate to the mobile station that it is to decrease the mean output

23 power level. The amount that the mobile station increases or decreases its power for every

6 station to which it is assigned over a 1.25 ms period. The base station receiver shall use the

7 estimate to determine the value of the power control bit (‘0’ or ‘1’). The base station shall

15 Common Control Channel, or Reverse Fundamental Channel and when commanded to

19 station shall not exceed the maximum specified power levels under any circumstances. 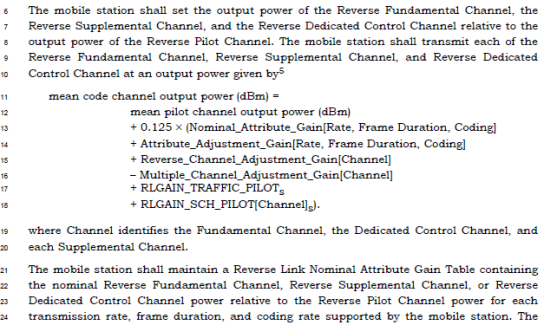 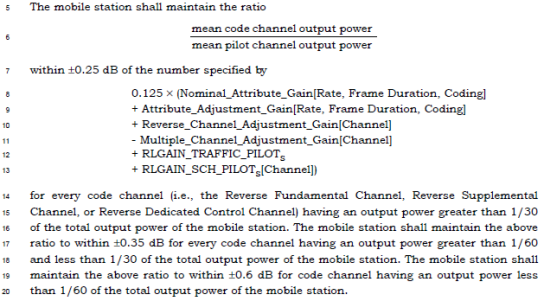 “wherein, during operation, after decreasing the transmit power following the first criterion being met and before the second criterion is met, the radio station continues to transmit a control signal with varying power to continue to track changes in channel quality to some extent.”